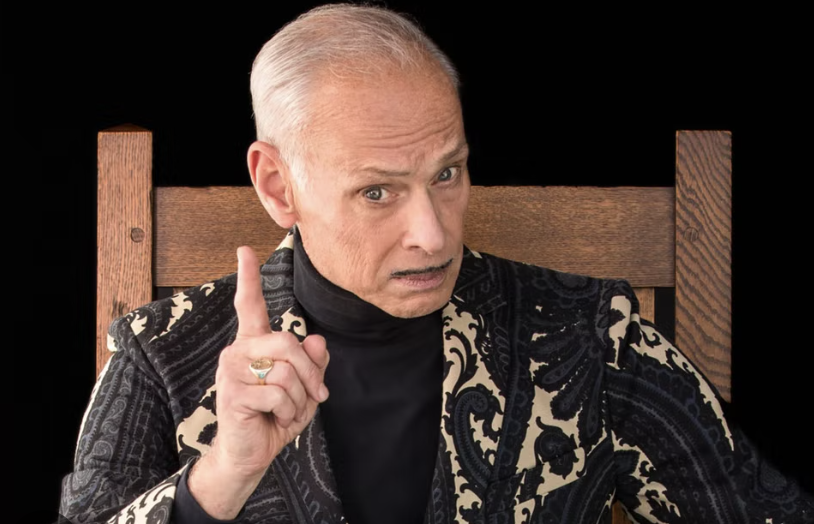 Everyone's favorite filth merchant, John Waters, brings his one-man show to New Orleans this Sunday. We look back at a recent visit, when he was touring his show, This Filthy World

This feature originally appeared in The Guardian
(by Paul Oswell)

“Welcome to the John Waters Massacre!”

So it was that John Waters, with typically provocative aplomb, announced his presence at the Tennessee Williams New Orleans Literary Festival. The dark blue stripes that amplified his gold blazer were the only visual distraction on stage at Canal Street’s Joy Theatre, as the filmmaker delivered an updated version of his one-man show, This Filthy World.

Waters, the headliner of this year’s festival, is no stranger to New Orleans.

“I lived here in the 1970s,” he said. “I was just about the poorest I’ve ever been. I basically just stole a lot. I almost joined this satanic cult called The Process, but I hated the cloaks they wore so I moved to New York.”

One of the few vice-friendly cities left in the US, New Orleans remains his spiritual home, or whatever the atheist equivalent is. Waters’s supposed favourite bar in the world is here in the historic French Quarter. The Corner Pocket is a gay dive bar with tattooed strippers – filthy in exactly the way Waters likes.

“Trash and camp just don’t cut it any more,” he told a rapt audience at his interview panel on Friday. “Filth still has a punch to it. The right kind of people understand it and it frightens away the timid.”

Waters is equally at home with the works of Tennessee Williams, having been commissioned to write the introduction to the 2006 edition of Williams’ Memoirs. In it, he credits Williams with saving his (cultural) life on two occasions.

The first was when, as a child in the 1950s, Waters stole forbidden books from his local library in Baltimore. The second was when Waters was 17, and through Williams’ writing, he gained inspiration to be an outsider, even beyond the already ostracised confines of the gay community.

Waters was as caustic as ever in his live shows, moving back and forth on stage like a cobra. The underlying theme of This Filthy World is “how to be bad at 70”, an age Waters is approaching with relish, aside from a dilemma over how to remain shocking in his dotage.

“Should I start taking ecstasy?” he asked. “Then I suppose I’ll love everyone. That sure sounds like hell to me.”

His live shows are part-retrospective, part State-of-the-Underbelly address as he regales the audience with behind-the-scenes glimpses from his film shoots and books, peppered with updates on which disturbing sexual practices and fetishes he has recently discovered.

The audience for his live show and his panel the next day at the Hotel Monteleone was a genial mix of young goths, well-pressed middle-aged gay men and seemingly genteel older ladies. Waters is very much The People’s Pervert – something about the unswerving nature of his fascination with filth is reassuring to even the most mainstream of onlookers. He feels like a safe pair of hands in the mire of society’s depravity.

Given the shocking extremities of his films, it’s strange to imagine he has his own limits of acceptability. If he doesn’t, he fakes them well enough to get a reaction. On Friday, he reserved some of his well-timed volleys of mock disgust for the adult baby community.

“Lock those weirdoes up!” he yells. “Have you seen their disgusting little catalogues?”

Waters champions most types of dysfunction and fetish, but he is perversely snobbish, too. His line is in tasteful degradation, which is a difficult prejudice to define, though if there were such a thing as crass-ism, that might be close to his outlook.

Waters was at the festival largely to talk about his book Carsick, a non-fiction work in which he hitchhikes, as anonymously as he can, across America from Baltimore to San Francisco. Over the course of nine days and 21 rides, he amasses more heartwarming stories than you would expect.

The people of the American midwest revealed themselves not to be hateful bigots, though of course the sample is restricted to the kind of people that would pick up a suspicious-looking 65 year old man, so it’s perhaps a skewed cross-section.

“Not one gay person picked me up,” he says, taunting the audience. “You pussies!”

With a mental genuflection to the festival’s inspiration, Waters talked about his longstanding love of Williams’ work and how it sustained a young man growing up in working class Baltimore.

“Through reading Tennessee Williams,” he said, “I knew there was a world out there that I needed to find.”

Waters was at his most serious when asked if Williams had any relevance in modern day literature. “Of course Tennessee Williams is relevant today,” he said.

“We wouldn’t have the freedom and drama we have today if he hadn’t broken the rules. He won out against all forms of censorship because he was so smart that stupid people couldn’t work out how to fight back.”

Listening to Waters’s onstage reminiscing, you get the sense that he isn’t a man who looks back with much regret. It’s an attitude that’s perhaps best summed up by his memory of a trashy teenager in his class at high school. Her hair, he remembers, was intricately teased and styled at the front, but at the back was a chaotic rat’s nest.

A John Waters Christmas plays at The Civic Theater this Sunday, December 11th