Skin in the game

*CW: This feature uses images of models of penises, so TW and NSFW* 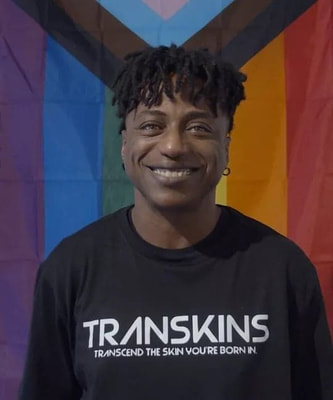 There are plenty of ups and downs for new entrepreneurs. As I meet Kai Williams, in the midst of launching their new company Transkins, it’s definitely an ‘up’ day -  they’ve coincidentally just made their very first sale. The box, ready to be mailed out, sits on our table at Saint Coffee as we chat. Kai’s excited, and so they should be. The contents of the box are life changing, and as we’ll soon discover, this rings true for more people than you might initially think.

In 2019, Williams was suffering from the strains of physical work in the movie industry, laid up in bed for around a month. That’s a lot of time to think about life, and one of Williams’ thoughts was that they had what they call “a treasure chest of bad sex toys”. Over the years, they’d bought toys that seemingly reflected little thought about the bodies of people using them, many made with cheap materials and just a general lack of awareness. It was an epiphany for Williams.

Williams bravely decided to go into business for themselves, but without an immediate game plan beyond some abstract ideas, a little serendipity was certainly welcome. Williams knew a Montana-based artist called Clara DeWeese, who had just unveiled new work: live castings of penises made from hard candy, presented on a wall as hunters would present animal trophies. Where DeWeese saw art, Williams saw practical potential in terms of packers - prosthetics that create the look of having a penis.

“I immediately asked Clara, ‘Can you show me how to do that?’ and she said yes.” A new life opened up for Williams. “She gave me the confidence to put my hands on clay and start sculpting. I’d never done it before. But inspiration just rained down on me. I started sculpting day and night. It was immediately like my dreams becoming reality.”

From this, St Roch Cock was born, initially an artistic project that was transformed into a practical one when DeWeese suggested that Williams meet her friend Autch Carey. Carey is a Portland-based special effects artist with years of experience in designing and producing sex toys. However, like Williams, they were also disillusioned with the way sex toys were made and marketed. Williams saw a fantastic opportunity for collaboration.

In 2020, Williams flew to Los Angeles, rented a truck and drove up to Portland. “I took my time,” they say. “I took five weeks to drive up to Portland, driving through all of this beautiful scenery. We met in Mount Hood National forest, camping. Our first business meeting was out in the woods and it was there in July of that year that we sealed the deal to work together!”

Carey was already close to making a prosthetic of the type that Williams had in mind. “By ‘close’, I mean we had to work for another year and a half refining and evolving the prototype that would become our first commercially available prosthetic,” they say. “But we immediately had this great working relationship. I didn’t want to be their boss; Carey had these great ideas that they hadn’t been able to actualize, and I had this vision and complete belief in them.”

Eighteen months later they had the first version of their packer, one that was realistic and that you could actually use in a bathroom. For the uninitiated, Williams explains its many benefits. “It’s a prosthesis that has aesthetic, practical, safety and health elements,” they say. “First of all, It helps to combat body dysphoria, it doesn’t look like a piece of trash or a piece of play-dough that someone just put a hole through. Safety wise, it keeps people from getting clocked in public bathrooms, you can pee in a urinal or a stall completely naturally, and that keeps people safe. And finally,  it’s a piece of art in its own right, something you can actually be really proud of.”

Williams was also determined that this should very much be a local enterprise. “I always wanted to bring a new kind of business to New Orleans,” they say. “It’s not the entertainment industry, it’s not the hospitality industry. I want to pull in workers, I want to put local people to work here in New Orleans! It’s my dream! I want them to love coming into work!”

Work is arranged somewhat remotely, with the main studio in New Orleans but elements of the production taking place both here and in Portland. In Portland, for example, the hyper-real models are hand painted.

The models are live-casted, and are an amalgam of multiple body casts (flaccid and erect) that are later morphed together with sculpting to make the models. “No one person has the perfect package, so we have to craft it.” Williams says. “We want a flaccid penis, but we also want pre-ejeculatory testicles, so that they’re not hanging down low and they provide a tighter, taut unit.”

A great amount of thought and care has gone into the design and model options. Seven colors match skin tones. Right now there’s only a cut version, but an uncut version is on the way. In terms of movement and density, it feels like a real penis, it’s slightly malleable but there’s a solidity and resistance that’s very lifelike. “These prosthetics should last you a lifetime,” Williams says.

Another link that Williams made was to the Veterans Affairs hospital, as the VA had just started to offer gender-affirming procedures for veterans. “This could include products such as this for trans folk that don’t want bottom surgery,” Says Williams, “But an even wider application could be for cis people that have genital injuries but can't have plastic surgery, so there’s a general medical element as well. Ours will be the first prosthetic of its kind available through Uncle Sam!”

“Like we say, we want everyone to be able to transcend the skin they’re in,” says Williams with a final grin. They have every right to feel optimistic after two years of hard work, taking a product to market that’s been made by people with an investment in its success that’s beyond economic. Motivation, determination and creativity have combined to result in a legitimately life-altering accessory. That’s definitely something to smile about.

For more information, go to Transkins.com

Read more!
Boy bi: A deep dive into one of the weirder SATC episodes
Blanching Out: Our review of A Peep Show Named Desire